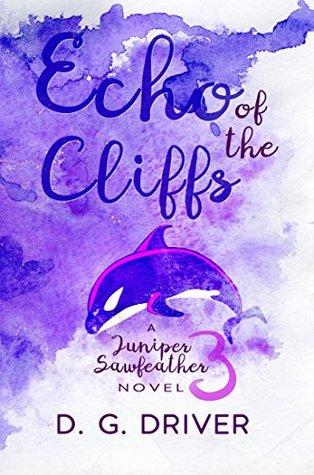 Juniper Sawfeather has learned there is truth to this American Indian legend. She knows how it connects the mermaids she saved from an oil spill and the ancient spirit that trapped her in the branches of an Old Growth tree. Now she wants to find out if the final part of this legend is true: that some kind of magical stone exists. A lone mermaid finds her and shares a vision of a cliff along the ocean shore. This must be the place, and June knows she needs to find it.

Tragedy happens when her parents take Carter and her on a mission to the San Juan Strait to collect evidence of construction run-off pollution, and they are attacked by a killer whale. June is convinced that the killer whale was led by mermaids, and she is desperate to find out why they attacked and where they are hiding. Once again, Juniper is on a heroic mission, the most frightening adventure yet. A thrilling ending to this award-winning trilogy!

Finally, today I review the final book of the Juniper Sawfeather trilogy : Echo of the Cliffs. In this book, we finally see the mermaids again, and get to the bottom of where they came from, and why they disappeared.

In Echo of the Cliffs, Juniper is done with school, and has grown as a person. While her life still isn’t going the way she wants it to, what with her parents see-sawing between treating her like an adult and still treating her like a child, the disappearance of her boyfriend and the media circus that follows her everywhere, Juniper has finally reached the point where she knows what she wants, and she’ll do anything to get it.

This is a feeling that might be familiar to a few people, if you just remove the mermaids : when you reach the end of high shcool and you’re just done with it, emotionnally speaking. When you become a competent adult not because you acquired any particular skill, but because you’re fed up with not being one. Juniper in this book still manages to wade into trouble, and she still is the same stubborn hothead as before. She is still lost and still questions her decisions. But emotionnally, she’s on another level, and what she lacks in confidence she makes up in sheer drive and determination.

This is why I maintain that D G Driver knows her stuff. This is very tricky character development to pull off, to start with an high school girl that feels like one, and to end with a girl that is ready for college away from her parents – and to get there organically.

Her parents, too, go through an interesting bit of character development. In this book it is her mother, finally, who is 100% willing to support her daughter’s decisions and help her go through with them, while her father is uncharacteristically reticent. This was a good decision on the part of the author. Not only does it help the story stay fresh, but it shows the parent characters as complex people. Not all YA books go through the trouble of doing that.

As for the actual plot of the book, with the mermaids and everything, I can’t really comment on it while avoiding spoilers, but once again D G Driver pulls through. She handles the native american legends and issues with care and respect. The tension and urgency in the second half of the novel is palpable, and the mystery is appropriately mysterious until we find out just what is going on, and then everything seem to happen all at once. Every character that matters has a little moment to shine.

There is one character who gets a little bit more magic in their life than they bargained for, and a tragic ending. That’s probably the only part of the book that I didn’t enjoy. I understand why it made sense in the narrative, but I liked that character a lot and he didn’t deserve that. Otherwise, everything else in the book is stellar.

We even get to see our favourite mermaid again, and we get closure for certain events that happened in the second book, which I wasn’t sure if they were going to be revisited.

All in all, a good read, and a solid ending to this trilogy. And you know me: I love the cover.

** This article was published with the support of my fans on patreon! Want to read more book reviews? Want to read them before anyone else? Want to vote on which book I read next? Head on to my patreon for all this and more! **